What Will Be the Next “Paul Newman” ? Secret Special Editions and Rare Watches

The words ‘limited edition’ have a certain degree of magic about them that seems to attract watch buyers. Many people find the idea of buying a watch that others can’t have due to scarcity quite appealing. Watch brands know this and have been releasing ‘limited editions’ a lot in the past few years as a way to sell more watches. Some question the true effect of these words in an industry where limited production is standard – and what happens when the market gets flooded with limited edition releases? The same can be said for ‘special edition’ watches. Over the years, watch brands have found numerous relevant and irrelevant reasons to label a watch as a ‘special edition’. Eventually, we may see the overuse of both terms lead to a loss of meaning, but it doesn’t mean there aren’t truly great watches labelled as such.

In this article, we will focus on some famous and some lesser-known limited editions and rare watches that might be worth considering. 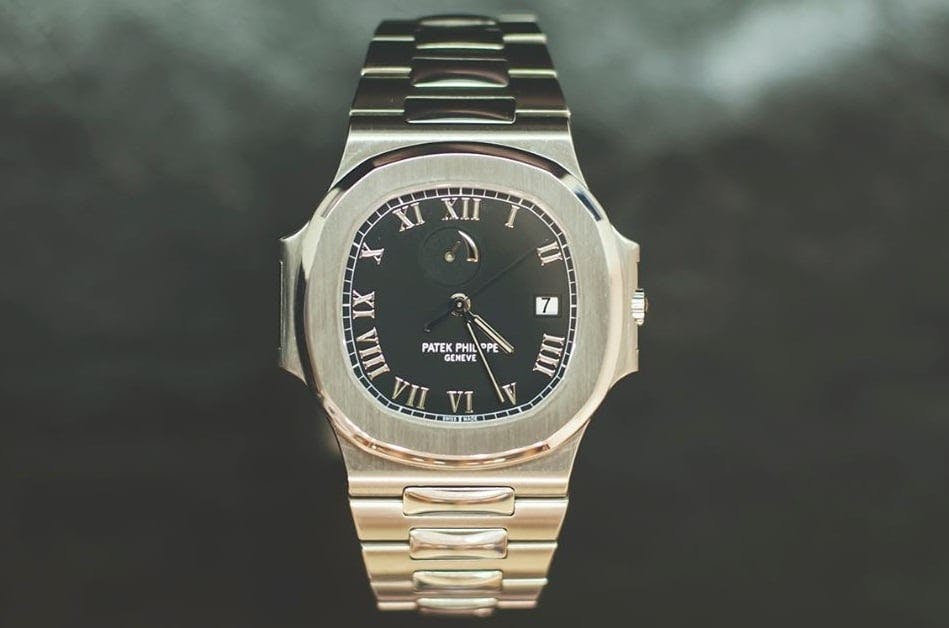 The Nautilus is a highly specialized and unusual watch in the Patek Philippe collection – and this version is even more unique. First and foremost, it features all the important strengths of a legendary luxury sports watch: the iconic Genta design with its characteristic porthole case and integrated bracelet and the big “jumbo” size with a diameter of 40mm, yet an elegantly slim height.

What sets this piece apart from its famous brothers in the collection, however, is that it was the first real successor of the original Nautilus Ref. 3700. When it was released in 1998, the legend had already been out of production for eight years and in the meantime, only smaller models were released like the Ref. 4700 ladies watch with a quartz movement and the Ref. 3800 with a diameter of 37.5 mm. Of course, the most obvious difference is the power reserve indicator at 12 o’clock. This was not only the first complication in a Nautilus, but it was also realized in a unique way: both the pointer and the “comet” move to display the remaining energy. 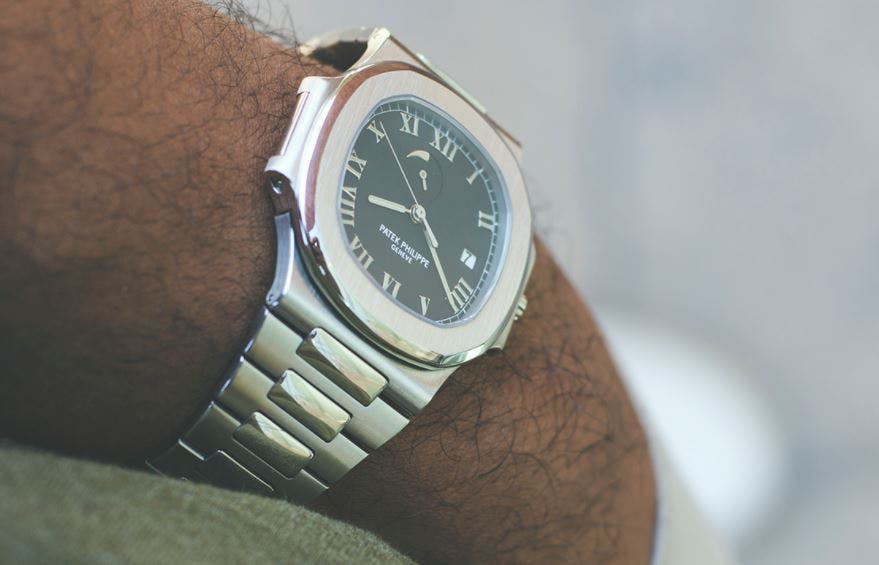 The dial also offers a few other deviations from the modern Nautilus. Instead of a dark blue dial with horizontal grooves, this watch features a matte black dial without texture and with Roman numerals. The logo was also moved to six o’clock to accommodate the power reserve, which is very unusual. Clearly this watch is quite different from both the original and modern Nautilus versions. Considering how iconic and important the Nautilus collection is today, Ref. 3710 is in a unique position. Still relatively undervalued, it could end up being what the Zenith Daytona was for Rolex up until last year. 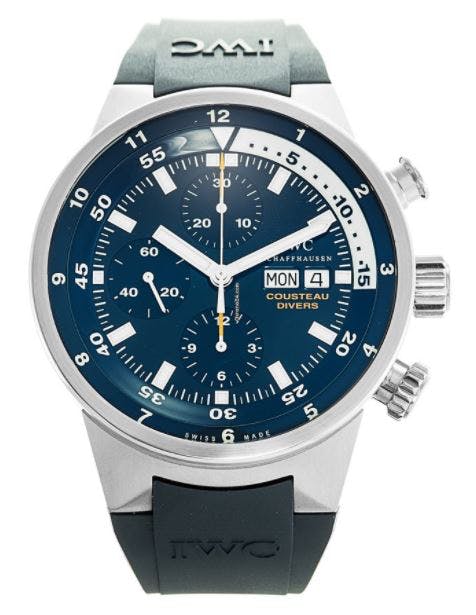 IWC has been a partner of the Cousteau Society since 2004 and has released some interesting watches to celebrate the life and work of famous deep-sea filmmaker Jacques Cousteau. The Cousteau diving watches are based on IWC’s regular range of diving watches, but feature different colors and unique caseback engravings. One of the most interesting models is the IWC Aquatimer Cousteau Divers Tribute To Calypso ‘Original Wood’ (ref. 3782-01) that was released in 2006. Limited to 2,500 pieces, this watch is extra special as it features a piece of wood on the caseback that used to be part of the famous Calypso ship that took Cousteau on adventures around the world.

The Calypso was actually a WWII British minesweeper that was de-commissioned by the Royal Navy in 1947. Afterwards, it was leased to Jacques Cousteau who then modified it to include a helicopter deck and the capacity to carry advanced diving equipment including mini-submarines. The Calypso went on to become one of the most well known boats in history and was featured in many of Cousteau’s movies. After Cousteau’s death in 1997, the Calypso unfortunately became the subject of lengthy legal disputes. Eventually those were settled and the ship was fully renovated.

After IWC and the Cousteau Society partnered up in 2004, IWC asked if they could use pieces of wood from the boat on this version’s caseback. When you buy this watch, you are actually buying a piece of history connected to the life and accomplishments of Jacques Cousteau. If you have seen any of his movies, you know how special his story is. 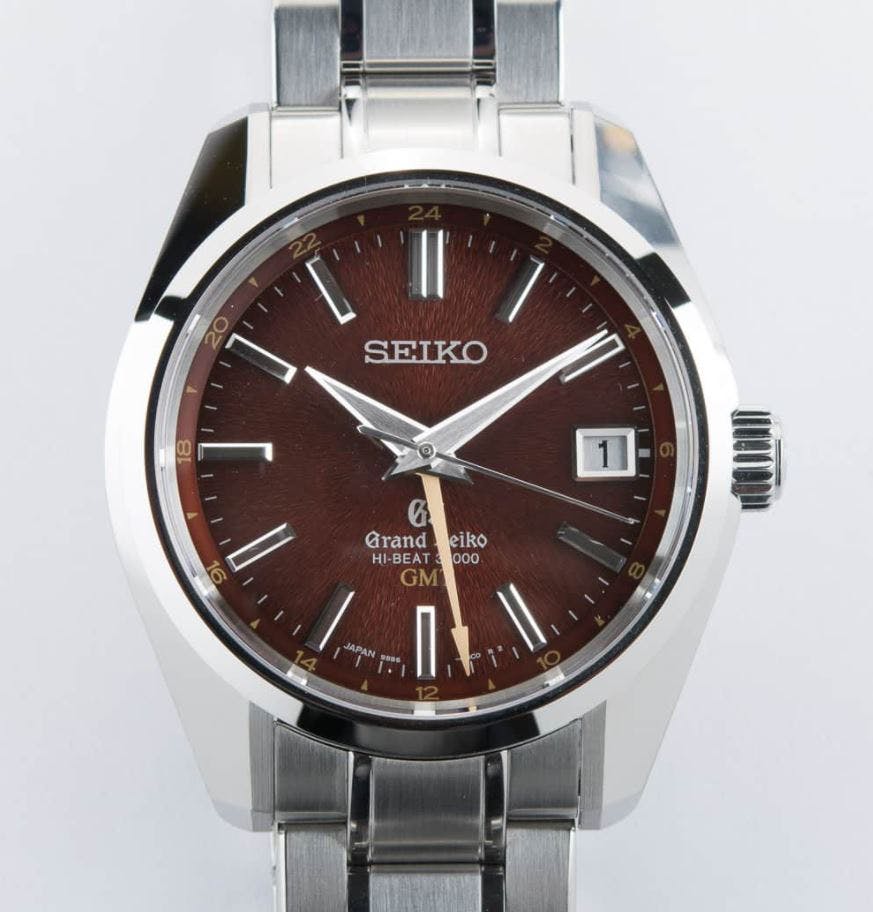 In 2014, Seiko introduced a new line of Grand Seiko watches featuring a special hi-beat movement with a GMT complication. The Grand Seiko Hi-Beat 36.000 GMT series consisted of two standard models – one with a white dial and one with a black dial – and a model limited to 600 pieces with a dark green dial. Overall, the series received rave reviews thanks to the meticulous design and production of the hi-beat movement – something the brand has become famous for worldwide. The watch people could not stop talking about, however, was the limited edition version with the dark green dial (ref. SBGJ005).

The limited version was introduced to commemorate the introduction of the newly developed 9S86 caliber that powers the series. Rumor has it that the dial color is based on the green landscape of the Iwate Prefecture in Northern Japan, which can be seen from the windows of the Shizuku-Ishi Watch Studio where Grand Seiko designers work. Since there were only 600 pieces made, the chances of getting your hands on one are slim, but there is still hope for you yet, because the Grand Seiko designers often look to their surroundings for inspiration.

If you like the story of the Japanese countryside influencing the design of a Grand Seiko, you could also opt for the Grand Seiko ref. SBGJ021. This watch was introduced in 2016 and is also a Hi-Beat 36.000 GMT. The watch features a unique deep red dial inspired by Mount Iwate at dawn. The second special feature is the rotor, which is visible through the caseback and features multiple colors including blue, purple, orange, and yellow. Again, these were inspired by early morning light as it strikes Mount Iwate. This version is limited to only 500 pieces and some are still available. If you want to own a watch inspired by nature, this may be the limited edition for you. 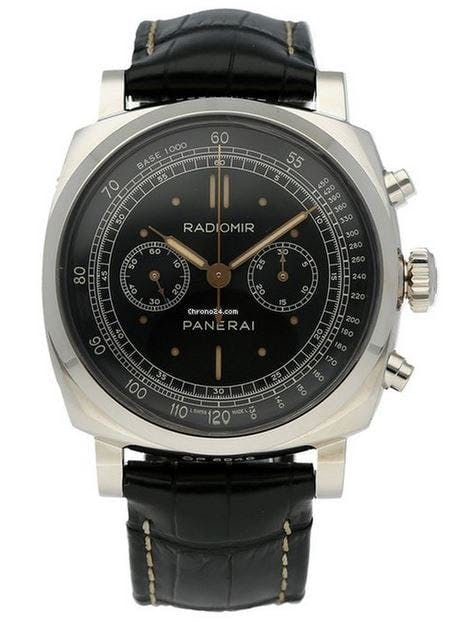 Panerai is a brand that is known for producing many of their watches in limited numbers, which actually allows them to make a lot of different special editions. The Panerai Radiomir 1940 Chronograph Limited Edition series was introduced in 2014 and features three watches. The story behind these watches might not be as remarkable as the other watches in this article, but it’s still a compelling one. Contrary to many other watch series that only vary in dial color and perhaps case material, all three Radiomir 1940 Chronograph models have completely different dial configurations and case materials. This makes each watch quite special and makes it harder to choose your preferred version.

The dial design is where these watches truly stand out from existing Panerai Radiomir models. The ‘Oro Rosso’ features a dark brown dial and a mix of Arabic and Roman numeral hour markers – a combination also known as a ‘California dial’. The ‘Platino’ features an ivory dial and dot hour markers as well as a blued central seconds hand and matching minute register. Lastly, the ‘Oro Bianco’ features the distinct Panerai sandwich dial, which means luminous elements are actually cutouts that reveal an extra layer beneath the main dial. Together these watches create a unique and beautiful limited edition series that stands out with its elegant retro design. It’s really up to you to choose your favorite.