The Grandfather of the Modern Chronograph Movement: Seiko 6139

Today, self-winding (or automatic) chronographs are quite common. Omega created a prototype of one back in 1948 but later abandoned their production plans. Over 20 years later, two companies and one collaboration would finally make it to series production: Seiko, Zenith, and a joint venture between Heuer, Breitling, and Hamilton. These manufacturers all introduced and launched their automatic chronograph movements in 1969, and this watch style would quickly become very popular throughout the industry.

Of the three calibers, the Seiko 6139 has had the greatest influence on future generations despite being the least well known. This movement centers on its vertical clutch and compact automatic rotor, a design many manufacturers have imitated since the 1980s. In fact, Frederic Piguet turned to the 6139 when crafting their legendary caliber 1185, which some call the “grandfather of the modern automatic chronograph.” Considering how many automatic chronographs the 1185 has inspired, there’s no denying the 6139’s influential role.

The Seiko Group is made up of several independent companies. One of the most important is the Seiko Instruments Corporation, formerly known as “Daini Seikōsha.” They are the branch behind the production of mechanical watches, including Grand Seiko luxury timepieces. The Seiko Watch Corporation acquired the company in 2020.

Another important arm is Suwa Seikōsha Co. Ltd., which spun off from “Daini Seikōsha” some years ago. This branch created the first Grand Seiko back in 1960. They were also responsible for the first quartz movement to enter series production, the Astron. Suwa Seikōsha later successfully applied their production techniques to manufacture printers. Today, the company operates under the name Seiko Epson Corporation and has weakened its ties to the Seiko Group. Nevertheless, the Spring Drive calibers and precise quartz movements that power the Credor and Grand Seiko collections are still manufactured by Suwa to this day. 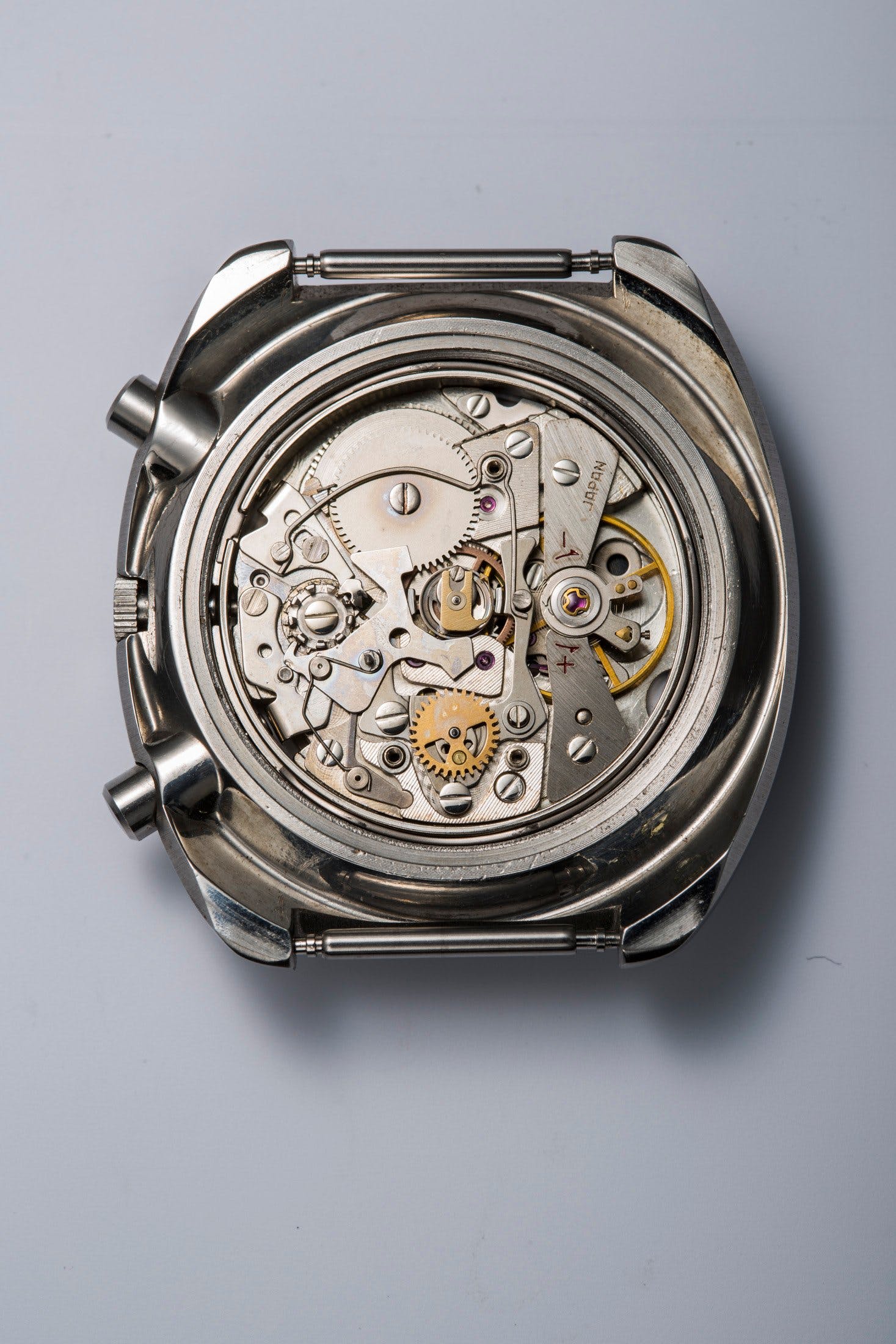 The Seiko caliber 6139 (without a rotor): This movement was developed using a base caliber from the 61 series. Image: Yu Mitamura

The caliber 6139 was also a Suwa product. In the 1950s, the company improved its technology to optimize the compatibility of watch components. The following years saw great improvements to production quality, and in 1964, the company presented the very first Japanese chronograph caliber: the Crown Chronograph. However, this movement was just a trial run using standard construction.

Watchmaker Toshihiko Ohki was primarily responsible for the success of the Crown Chronograph, and as a result, he received a commission to develop a new type of chronograph movement. Ohki started by designing the series 61 automatic base movement and later added a chronograph module. A large proportion of series 61 movement components could be made by machine, meaning the caliber was perfectly suited for series production.

The minute and seconds wheels sit one on top of the other in the series 61, meaning the manufacturer had to punch fewer holes in the main plate. Ohki’s invention took inspiration from car transmissions and featured a vertical clutch attached to the two stacked wheels. Ohki explained, “It was a really desperate situation. The problem was that there was no spring that would not bend in the direction of rotation (of the fourth wheel) and that would slacken on disengagement. So I came up with the idea of a special disk spring (for the vertical clutch).” 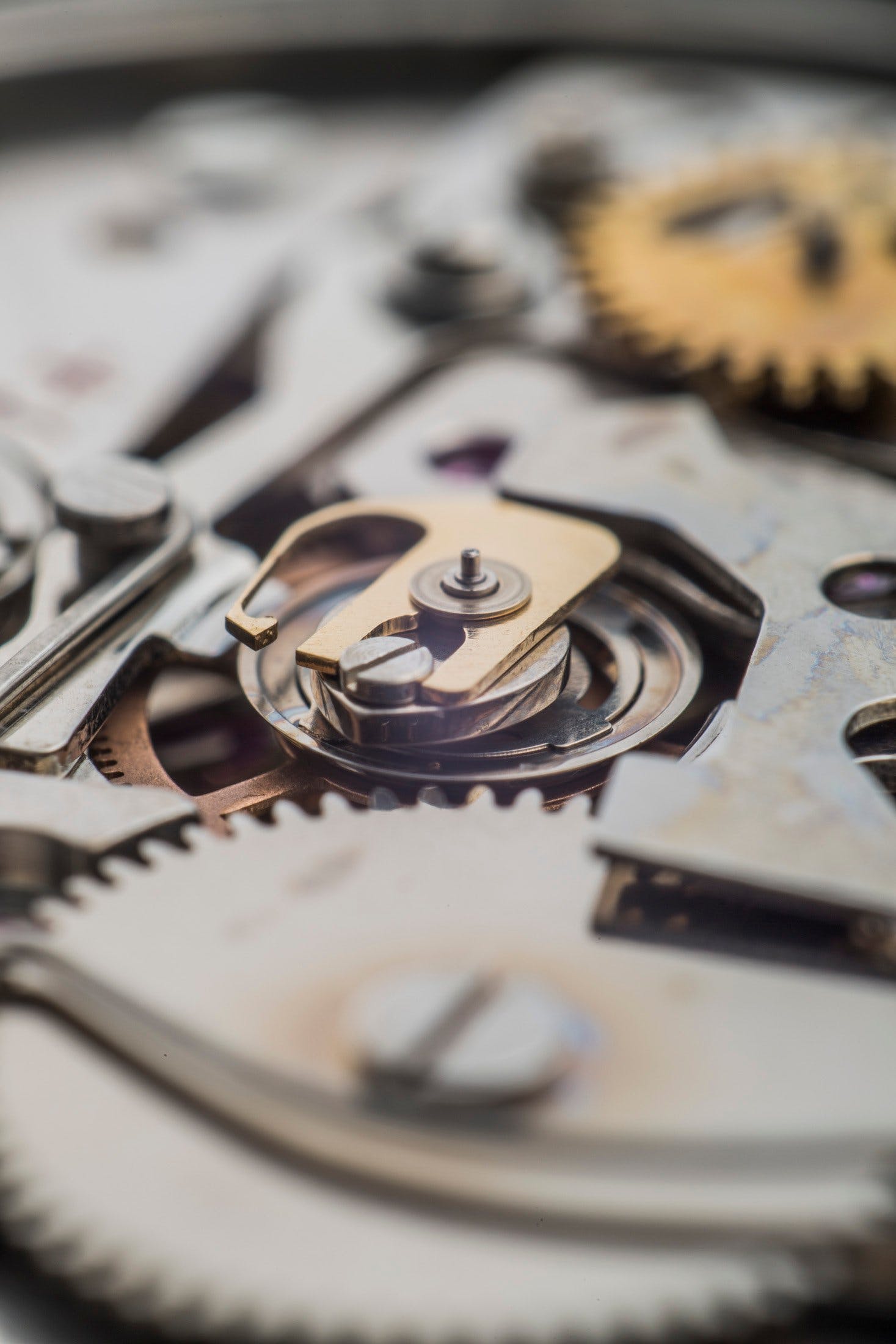 The Seiko 6139 has a vertical clutch, a design that would later influence many other manufacturers. Image: Yu Mitamura 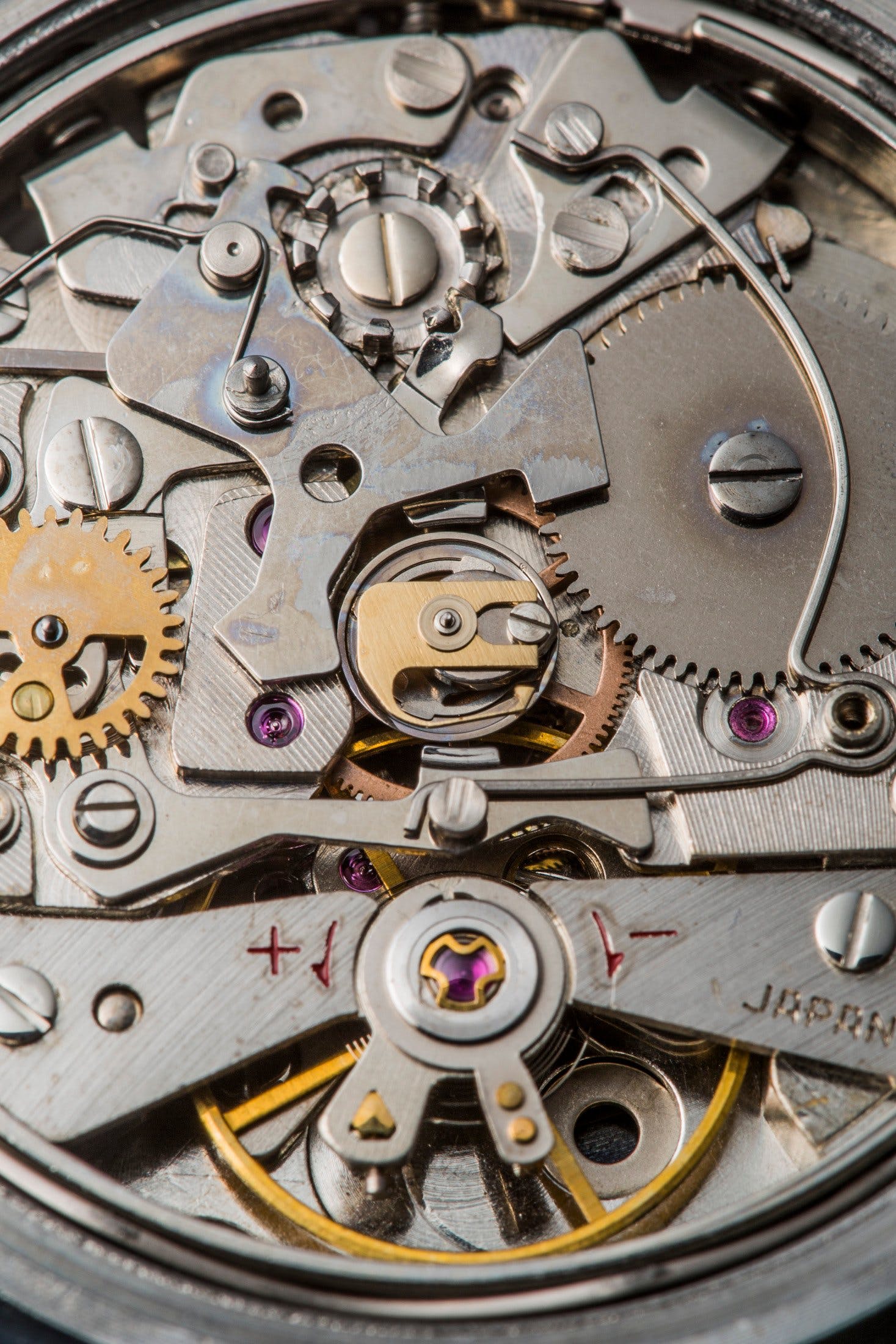 Inside the Seiko 6139: The column wheel is located near the clutch to ensure smooth functioning. Image: Yu Mitamura

The vertical clutch was not a new invention. In the late 1880s, Longines debuted a chronograph with a similar design. Pierce had also already released a chronograph with a simplified vertical clutch made of natural rubber. Ohki’s movement, however, used a disc spring to operate the complication. When you start the chronograph function, the disk drops, and the clutch engages. When you stop it, the disk lifts, releasing it from the clutch. This process requires a component that bears a slight resemblance to scissors. It sits close to the column wheel, which ensures safe operation. Many other manufacturers later adopted this design in their own automatic chronograph movements.

Seiko also made use of their so-called Magic Lever instead of conventional gears for the self-winding mechanism. This is comprised of very few components, meaning production was relatively simple despite the complicated construction. The Magic Lever also maximizes efficiency and causes less wear and tear, leading to improved longevity.

Seiko initially had no intention of making their new automatic chronograph expensive nor particularly complicated. All the components were straightforward shapes that could be punched out using a machine press, which enabled a high production rate. They did without a second hand to reduce costs and streamline production even further.

In 1969, Suwa Seikosha put the final touches on the caliber 6139, complete with a Magic Lever and vertical clutch system. On May 21, 1969, Seiko officially debuted the movement under the name “61 Speed-Timer.” However, the caliber had already begun appearing in watches as early as January of the same year; you can still find examples from those early months today. Seiko published the first advertisement for their new automatic chronograph in February 1969. Both the company and Ohki were unaware that the 61 Speed-Timer was the world’s first automatic chronograph movement. At the time, Seiko was busy planning the release of the quartz Astron later that same year. 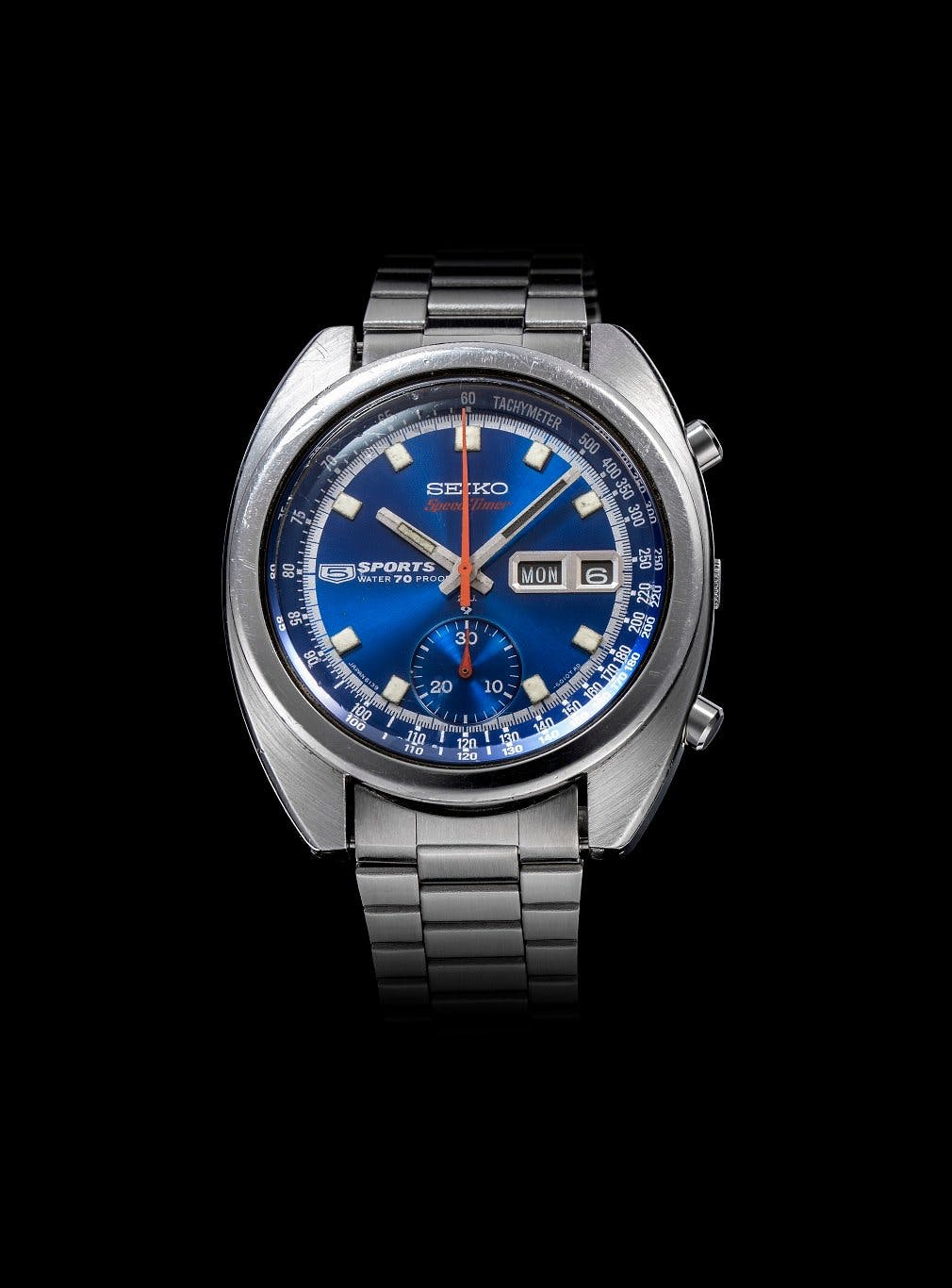 The Seiko 5 Sports SPEEDTIMER: The world’s first watch with an automatic chronograph movement debuted in May 1969. Image: Yu Mitamura

Prices for automatic chronographs outfitted with the 6139 were initially quite reasonable; however, they have since developed into sought-after collector’s items, with current prices reflecting this increase in demand. A watch powered by a Seiko 6139 is an absolute must-have or anyone who collects historical Seiko watches and/or loves automatic chronographs.

If you’re considering making a purchase, be sure to investigate the functionality of the vertical clutch system. As long as the chronograph is functional, the 6139 can more or less be repaired. Another important consideration is the watch’s exterior. Many Seikos from this era are missing components. Be sure to check that the watch’s hands and dial are well preserved and intact. Although it is vital with other watch models, it is less critical that everything is in its original factory condition. Why is that? Well, it was common practice in the 1950s and 60s to replace Seiko components on a near-monthly basis. Therefore, it’s more important that everything is in good working condition.

The Seiko 6139 may be less well known than some other big-name automatic chronograph movements, but its historical significance is on par with the Longines 13.33Z from 1910, the Valjoux 72 from the 1930s, and the split-seconds Venus 185. If you find a watch powered by the Seiko 6139 at a good price on Chrono24, you would be wise to take the plunge.

Grand Seiko: From a Single Model to a Luxury Brand

What Makes Seiko so Special

I discovered my interest in watches at a very young age. I used to have a job like anyone else, but in 2004, I decided to start a career as a freelance…