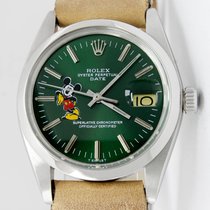 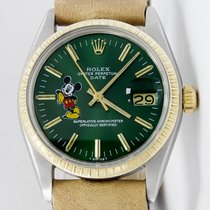 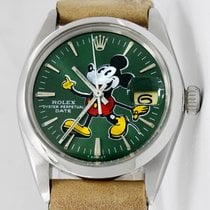 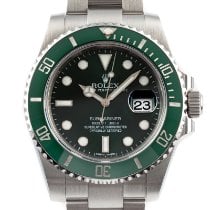 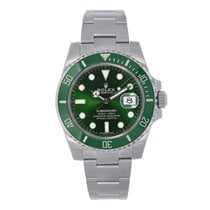 Kermit and Hulk: The Green Submariners

The Submariner diving watch is one of Rolex's most popular timepieces. The two models with green components, known among fans as "Kermit" and "Hulk," are especially desirable collector's items that are likely to continue increasing in value.

In 2003, Rolex celebrated the Submariner's 50th anniversary by releasing a special edition of the world-famous diving watch. While the Submariner had previously only been offered with a black bezel and dial, the bezel of this special model shines in a deep green. Watch enthusiasts and fans quickly gave this edition a nickname befitting its unusual color scheme: "Kermit." This timepiece can be found under the reference number 16610LV.

The Submariner with the reference number 116610LV followed in 2010. Not only did it have a green bezel, but it also featured a green dial with a subtle sunburst pattern. What's more, it marked the introduction of the new "maxi case." While still 40 mm in diameter, this version of the Oyster case feels more massive than that of its predecessor thanks to its larger lugs and enlarged crown guard. Fans were once again quick to come up with a nickname for this much greener and heftier timepiece, naming it after the green superhero: the "Hulk."

It's not just the dial colors and cases that separate these two models: While the Kermit has an aluminum bezel inlay, the Hulk's bezel inlay is made of Rolex's proprietary Cerachrom ceramic. This makes the Hulk's bezel much more scratch-resistant. Otherwise, these two models are quite similar. Both are made of stainless steel and have a so-called "maxi dial" with enlarged, glow-in-the-dark indices. Each also has a date display with a Cyclops lens at 3 o'clock.

In September 2020, Rolex released a new version of the Kermit. Its Oyster case is 1 mm larger than previous models and houses the new in-house caliber 3235 with a 70-hour power reserve.

Reasons to Buy a Green Submariner

Prices at a Glance: Green Submariners

Prices for a Green Submariner Date

Green Submariners are coveted collector's items and are likely to appreciate in value. This is especially true of the Submariner Kermit ref. 16610LV, as it is no longer in production. Be prepared to spend about 23,500 USD for a mint-condition model. Pre-owned pieces sell for around 16,000 USD. For comparison: Back in mid-2018, prices for a Kermit ranged from 11,500 to 16,000 USD, depending on its condition.

Rolex manufactured so-called "Flat 4" models from 2003 to 2004. You can recognize these watches by the flat-topped "4" in the "40" on their bezels. If you'd like to call one of these collector's items your own, you should expect to pay a bit of a premium. Never-worn versions can demand up to 36,000 USD.

If you like the Kermit edition but prefer ceramic bezels, then the ref. 126610LV from 2020 is the right watch for you. This model features the obligatory black dial and green bezel but uses Rolex's state-of-the-art Cerachrom ceramic for the inlay. Its Oyster case is also slightly larger at 41 mm in diameter and has narrower lugs. The in-house caliber 3235 powers this timepiece. The movement boasts a Chronergy escapement and an improved, 70-hour power reserve. Rolex lists the new Kermit for 9,550 USD.

Rolex uses 904L stainless steel for their watches; the monobloc case, screw-down case back, and bracelet are all made of this material. This type of stainless steel is considered more scratch and corrosion-resistant than more common type 316L steel. Thanks to its four gaskets, the Triplock crown ensures no water gets inside the watch. The crown screws down into the case and can be unscrewed to set the time. You can also manually wind the movement using the crown.

With a depth rating of 300 m (30 bar, 984 ft), the Submariner can easily reach depths that recreational divers can't. This makes the Submariner a great option for professional divers. For those whose jobs take them even deeper, Rolex offers the Sea-Dweller series. Each of these watches is water-resistant to 1,220 m (122 bar, 4,000 ft). There's also the Deepsea, which can withstand depths up to 3,900 m (390 bar, 12,795 ft). Diving watches must be easy to read in the dark. With this in mind, Rolex outfits the Submariner with Chromalight, their proprietary luminous material that glows blue in the dark. Other watch manufacturers use SuperLuminova, which glows green in the dark.

The in-house, automatic caliber 3135 powers both green Submariner watches, as well as the Sea-Dweller Deepsea and various other models. The movement debuted in 1988 and features a blue parachrom spring. This spring type is less susceptible to extreme temperatures and hard impacts. The movement's balance ticks at a frequency of 28,800 vibrations per hour (vph). Rolex has had the caliber certified by the Official Swiss Chronometer Testing Institute (COSC). According to the manufacturer, the movement will only deviate from the official time by a maximum of two seconds per day. Thanks to its 48-hour power reserve, you can set your watch aside over the weekend without it running out of energy.

The caliber 3235, which debuted in 2020, builds upon the 3135 and comes with several improvements. The most notable changes are its longer, 70-hour power reserve and the Chronergy escapement. This component is made of a nickel-phosphorous alloy that is less sensitive to magnetic fields and results in more accurate timekeeping.